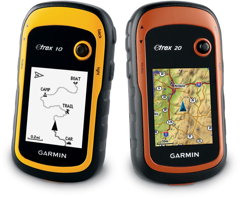 As for the new units:

The Rino 610 ($350) uses AA batteries and is thicker than its stablemates; the Rino 650 ($500) adds a removable lithium-ion battery (with less battery life), a microSD card slot, a compass and altimeter, a more powerful GMRS radio, a NOAA weather radio, and unit-to-unit transfer; the 655t ($600) adds to that more internal memory, preloaded topo maps and a five-megapixel camera.

Garmin expects them all to be available in the third quarter of 2011.