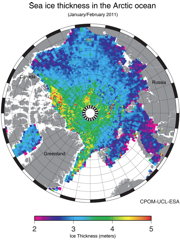 The European Space Agency has released a map of sea ice thickness in the Arctic based on observations by the CryoSat-2 satellite. “CryoSat measures the height of the sea ice above the water line, known as the freeboard, to calculate the thickness. The measurements used to generate this first map of the Arctic were from January and February 2011, as the ice approaches its annual maximum. The data are exceptionally detailed and considerably better than the mission’s specification. They even show lineations in the central Arctic that reflect the ice’s response to wind stress.” There’s also a map of Antarctic ice, but it’s preliminary.