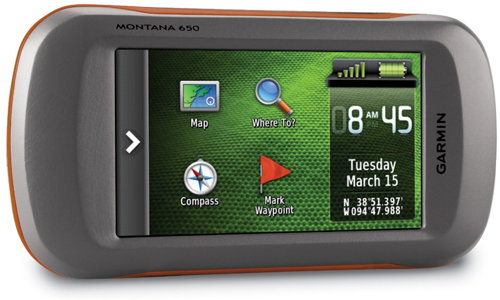 Garmin has announced the Montana series of GPS receivers, which seems to be an attempt to make an all-round, all-in one, GPS unit — i.e., it can be used on the trail as much as it can be used in the car.

Garmin’s previous attempt at a dual-use GPS, the nüvi 500 series, was a dashboard unit that doubled as a handheld; the Montana, on the other hand, is a handheld unit that comes with turn-by-turn directions. It resembles the Oregon, in that it’s a ruggedized touchscreen device, but is larger and heavier, with a four-inch, 272×480 pixel screen (the Oregon has a three-inch, 240×400-pixel screen).

The 600 is the base unit, the 650 adds a five-megapixel camera, and the 650t also adds preloaded topo maps. Available reasonably soon; MSRP ranges from $550 to $700 — which is to say, pricey. I can’t help but think that separate dashboard and handheld units might be a better option in most cases.