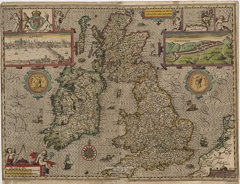 John Speed’s atlas, The Theatre of the Empire of Great Britaine, first published 400 years ago, has been digitized and put online by the Cambridge University Library, which possesses one of only five sets of proof maps. (Zoomify format; Flash required.) Print copies for sale. News coverage from the Daily Mail; a gallery of Speed’s maps from BBC News.