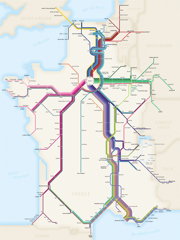 Cameron Booth has previously done an Amtrak route map and a map of the U.S. Interstates in the style of a subway diagram; more recently, he’s done a system map of the French high-speed rail network — “all the high speed train routes that pass through France. This includes the French (SNCF) TGV trains, the Eurostar trains from London, the Thalys services from Belgium and the Netherlands, and some ICE services from Germany that operate in tandem with corresponding TGV services from France.” (He’s also done a new version of his Interstate map.)