The Scale of Maps 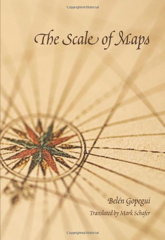 Bookslut’s Christopher Merkel reviews the English translation of Belén Gopegui’s 1993 prize-winning debut novel, The Scale of Maps (La escala de los mapas), in which a geographer and a mapmaker conduct an affair.

[A]side from its focus on the idea of place, The Scale of Maps isn’t focused on any one place in particular — anything but. Despite taking place in Spain, the book isn’t about anything particularly Spanish (unless it is and I entirely missed it, in which case you know I’m good for an apology). But still, I haven’t encountered anything particularly like its intricate cartography from anywhere else. The Scale of Maps is very much an idea book of cosmopolitan character, and Gopegui seems to have intended it as such: according to Sergio, “books are the maps of men. Every act of reading involves the paradoxical act of touching a map with the tip of the index finger… I believe in maps. They establish a unique relationship between us and the world, as do books.”