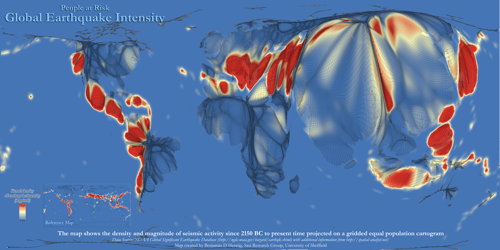 This map compares historical seismic activity on a gridded equal-population cartogram: the colours show past earthquake activity; the map is distorted by population. “The resulting map,” says the press release, “gives each person living on earth the same amount of space while also preserving the geographical reference. The map does not only show the areas that are at highest risk, but also how this risk relates to global population distribution.” More at Views of the World.