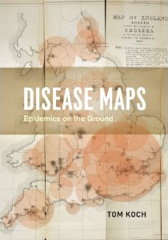 Via MapHist comes word of a forthcoming book by Tom Koch, due out in June: Disease Maps: Epidemics on the Ground. From the publisher’s website:

Disease Maps begins with a brief review of epidemic mapping today and a detailed example of its power. Koch then traces the early history of medical cartography, including pandemics such as European plague and yellow fever, and the advancements in anatomy, printing, and world atlases that paved the way for their mapping. Moving on to the scourge of the nineteenth century — cholera — Koch considers the many choleras argued into existence by the maps of the day, including a new perspective on John Snow’s science and legacy. Finally, Koch addresses contemporary outbreaks such as AIDS, cancer, and H1N1, and reaches into the future, toward the coming epidemics. Ultimately, Disease Maps redefines conventional medical history with new surgical precision, revealing that only in maps do patterns emerge that allow disease theories to be proposed, hypotheses tested, and treatments advanced.