Maps in Comics: In Maps & Legends 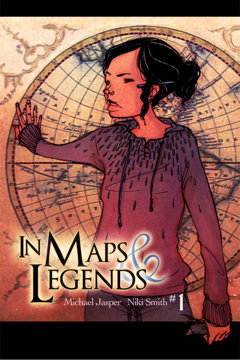 In Maps & Legends is a digital comic book series about a fantasy mapmaker who finds herself drawn into a mysterious world she’s been mapping.

Kaitlin is a newly single freelance artist who is stuck in the rut of the well-paying, for-hire covers and maps she creates for fat fantasy novels.

But at night, driven by some strange compulsion, Kait has been working long hours on an intricate, mixed-media map of a place she’s never been, a map that covers all four walls of the window-less spare room she keeps locked next to her tiny bedroom. She’s not sure where the inspiration for the map comes from, but she can’t seem to help herself.

One cold night, Kait is visited by a disheveled man named Bartamus who claims to be from another world. He needs her to finish a map of his dying world so he can use his skills to save it.

The comic is available through a number of venues, including e-book readers, Graphic.ly, and Comixology. Four of ten issues have been published so far, with a new issue coming out every six weeks. Each issue costs 99¢. The first four issues are also available as a combo e-book for the Kindle and the Nook for $2.99.

I read the combo e-book on the Kindle app for the iPad, which is a less effective interface than the Comixology app (which has a free eight-page preview). The art is full-colour on the iPad, and is rotated 90 degrees: enable your screen lock, rotate your iPad and, counterintuitively, scroll up. 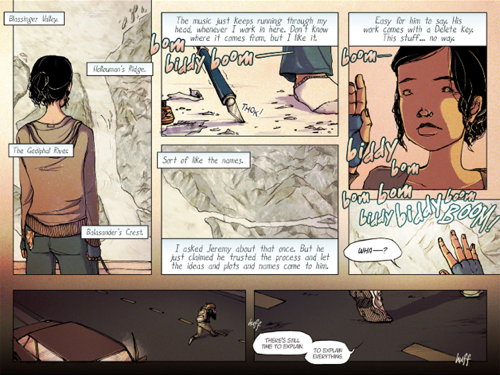 The artwork by Niki Smith is, as you can see above, beautifully done, with steampunky bits and lasers contrasting with map-influenced earth tones. The story, written by Michael Jasper, makes full use of what Jo Walton calls “incluing” — things are revealed in bits and pieces rather than in a giant infodump (as in the description I quoted above). It’s an effective literary device, but it does mean that it is not immediately clear what is going on, particularly when, as in a comic book, description is purely visual: we’re shown, not told, unless it’s spoken or thought. The fact that it’s a serial is a little frustrating: it’s hard to stop at issue four, and wait six weeks for each new installment, when things are still so mysterious — I want the rest of the story now, which I think is a good sign: it’s tense and it’s gripping. Definitely worth a look.