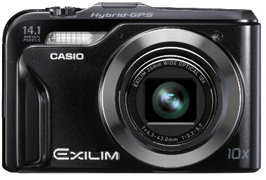 I was wondering what had happened to Casio’s digital camera with built-in GPS, which had been announced last year at CES and was scheduled to be released last fall (see previous entry). Turns out that in the interim it had been renumbered the Exilim EX-H20G, which stymied my search. Anyway, it’s out, and Engadget had a review last December. Their conclusion:

You’ll be hard-pressed to find another point-and-shoot on the market with a feature set like this one, particularly when you consider the impeccable Hybrid GPS system. It’s not the smallest nor the cheapest pocket cam on the market, but if you’ve been yearning for a geotagging compact with 720p video, above-average image quality and a 10x zoom, it could definitely be $350 well spent. Sure, we wish the inbuilt mapping system was a bit more robust (and interactive, while we’re on the subject), but given that each and every shot/video we grabbed integrated perfectly with iPhoto and Picasa with regard to location, we can’t kvetch too loudly.