Cameras with GPS from Canon and Pentax 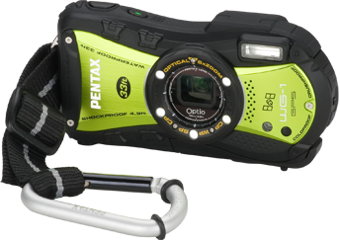 A couple of compact digital cameras with built-in GPS have been announced at the CP+ Camera and Photo Imaging Show in Japan this week: Canon’s PowerShot SX230 HS ($350) and Pentax’s Optio WG-1 GPS (pictured; also in black), which at $400 is a $50 premium over its non-GPS cousin. Both to be available next month. News coverage: Digital Photography Review (Canon, Pentax), Photography Blog (Canon, Pentax).